In this article we want to draw your attention to an important aspect of horse fly traps, currently sold in the market. By meaning of their ability to unintentionally trap a much wider range of flying insect species. 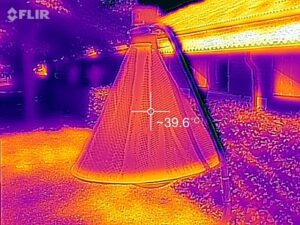 In the past 10 years horse fly traps have received recognition from the market: from a bizarre product – which raised more questions than answers – it has grown into a matured product, which is recognised for its catch performance. A horse fly-trap is meant to attract those insects who can see infrared images. They are attracted by the black ball, which is heated up by the sun. The warm black ball, with the shape, movement and size of the behind side of a horse, has an infrared signature which is noticed by most blood sucking insects, such as the horse flies.

Once the horse flies are on the black ball, they are guided by a funnel, which is placed over the ball into a catch tray, from which they cannot escape. Easy and reliable. This funnel is commonly executed in the colour white.

It is this colour of the funnel, which can offer a big downside.

Light coloured objects (white and yellow) have the ability to polarize (reflect) ultraviolet light emitted by the sun. This ultraviolet light, also known as UV-A light, is noticed by a large group of flying insects, who act strongly on this. Ultraviolet light is perceived by these insects as food stuff and are drawn by this specific light.

Most horse fly traps are executed with a white funnel.

Amongst these flying insects, who strongly act on UV-A light is also the bee. Bees are able to see the polarized light coming from the white funnel from a big distance and will be drawn towards it. These bees could easily enter the funnel and eventually get caught inside the collect tray.

As a result a good amount of bees could end up in the collect tray of the H-trap. There is a growing awareness from the market of the situation of the bee population in Europe. Pesticides have had a dramatic impact on the bee population, which has been halved. It is important that we avoid attraction of horse fly traps by useful insects, such as the bee.

To make sure that the funnel does not attract useful insects, the colour of the funnel has been altered. From the colour green it is known that little or no UV-A light bounces of its surface. This makes the horse fly trap virtually invisible to for instance the bee. Our horse fly trap with green funnel has been field tested from 2012 onwards and from 2014 available for you.

Our conclusion: the green funnel offers no attraction potential to bees.

A horse fly trap should be a selective trap, with little or no attraction potential on useful insects. By changing the colour of the funnel from white to green we make the horse fly trap invisible for a large group of useful insects and avoid that – amongst others species – bees are attracted and get caught in the trap system.

This website uses cookies to improve your experience while you navigate through the website. Out of these, the cookies that are categorized as necessary are stored on your browser as they are essential for the working of basic functionalities of the website. We also use third-party cookies that help us analyze and understand how you use this website. These cookies will be stored in your browser only with your consent. You also have the option to opt-out of these cookies. But opting out of some of these cookies may affect your browsing experience.
Necessary Always Enabled

Any cookies that may not be particularly necessary for the website to function and is used specifically to collect user personal data via analytics, ads, other embedded contents are termed as non-necessary cookies. It is mandatory to procure user consent prior to running these cookies on your website.