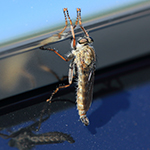 Why do I need a horsefly trap?

Protect Your Horses, Riders, and Trainers With Our Professional Horse Fly Trap. Since they feed on blood, their aggressive stings are very painful not only for animals, such as horses and cows, but also for humans. The new H-trap system effectively controls horse fly numbers, reducing them to an absolute minimum.

Protect Your Horses, Riders, and Trainers With Our Professional Horse Fly Trap.

Since they feed on blood, their aggressive stings are very painful not only for animals, such as horses and cows, but also for humans. The H-trap is designed to be placed outdoors, where it works without the need for chemicals or electricity.

Extensive independent trials have shown a reduction of 90-95% in horse fly numbers in areas protected by the H-trap can be realized.

The horse flies are ‘tricked’ into mistaking the centrally placed black ball in the H-trap as a large animal, such as your horse. Like the body of the horse, the ball emits heat which attract them to it.

Once they position on the black ball, they will investigate it and try to sting it. Since they will be unsuccessful in gaining their desired blood feed, they will follow their natural behaviour and fly away.

Horse flies naturally fly upwards, hood system, where they are guided into a centrally placed collection bin. This is filled with water and they die in the trap.

How to get the best out of your H-trap:

Horse flies are a constant nuisance, particularly during the period May – October in the northern hemisphere.

This website uses cookies to improve your experience while you navigate through the website. Out of these, the cookies that are categorized as necessary are stored on your browser as they are essential for the working of basic functionalities of the website. We also use third-party cookies that help us analyze and understand how you use this website. These cookies will be stored in your browser only with your consent. You also have the option to opt-out of these cookies. But opting out of some of these cookies may affect your browsing experience.
Necessary Always Enabled
Necessary cookies are absolutely essential for the website to function properly. This category only includes cookies that ensures basic functionalities and security features of the website. These cookies do not store any personal information.
Non-necessary
Any cookies that may not be particularly necessary for the website to function and is used specifically to collect user personal data via analytics, ads, other embedded contents are termed as non-necessary cookies. It is mandatory to procure user consent prior to running these cookies on your website.
SAVE & ACCEPT